Meet some of the UK farmers who grow our berries

Want to hear more from our growers? We’ve done an #AsktheExpert series, find it here 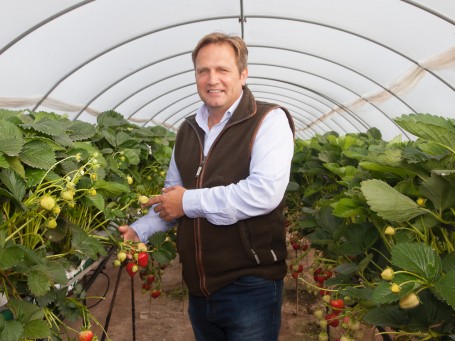 Lochy and Debbie Porter own East Seaton Farm situated by Arbroath, Angus on the East Coast of Scotland. East Seaton first produced soft fruit in 1991 and since then, production has expanded and continues to do so. New systems and plant varieties have been incorporated to ensure continuous production of high quality fruit for 6 months of the year.

The farm comprises 400 acres of grade 2 sandy silt loam soil on which strawberries, raspberries, blueberries and blackberries are grown along with barley and potatoes. New berry varieties that are bred and developed as part of Angus Soft Fruits breeding programme are trialled at East Seaton before full commercial production. As a producer of the finest quality fruit, Lochy Porter supplies the major UK supermarkets and premier food service outlets and employs over 1,000 people in the height of the berry season. 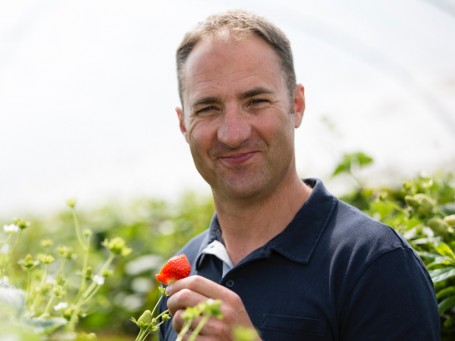 Harry Hall runs family business Hall Hunter Partnership with his parents Mark and Mary. It was formed in May 1966 when Mark and Mary married, and bought Heathlands Farm near Wokingham, Berkshire together with Mark’s mother.

The farm has grown from just two acres of strawberries in 1970 to over 1100 acres today, consisting of strawberries, raspberries, blueberries, and blackberries. Hall Hunter now employ over 2,300 people at the height of the season to help pick the berries, each of which has to be harvested by hand to ensure the highest quality product reaches consumers. 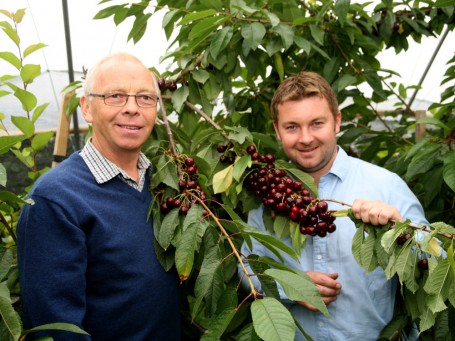 Ross and Murray Mitchell are a father and son team based near Laurencekirk, East Scotland. Castleton Fruit Farm is the most northerly blueberry farm in the world – on the same latitude as the Gulf of Alaska!

Long daylight hours and a cool Scottish summer providing the perfect growing conditions for delicious, late-season strawberries. The cool climate allows the fruit to ripen slowly, giving the plants time to put down good root systems and enhancing the sweetness of the fruit. 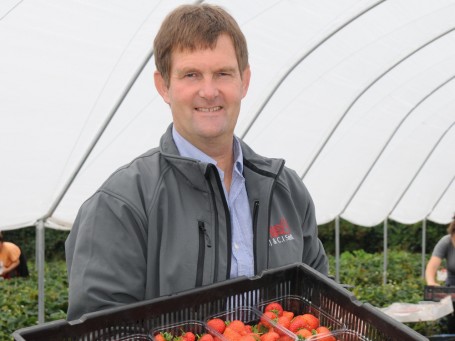 Anthony runs AJ & CI Snell farm with his wife Christine, with three generations of farming experience in the family.

With over 450 acres of land at their Herefordshire farm, they produce an impressive 950 tonnes of strawberries, raspberries and blackberries, and they’re still growing! Anthony and Christine have recently been awarded LEAF Demonstration Farm Status due to their Integrated Farm Management 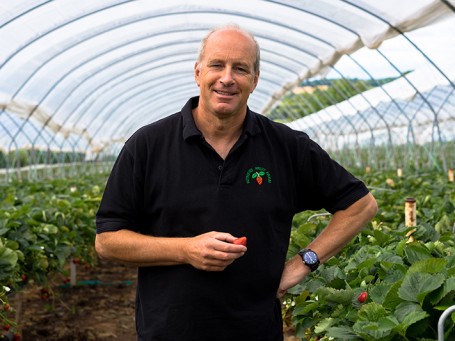 Established in Ledbury, Herefordshire in 1958, Withers Farm has been producing berries since 1968 where Allen Leeds began with a smallholding of 18 acres of which he grew blackcurrants and apples then, shortly after started to grow strawberries. When Allen’s son George took over the business he expanded and diversified; blueberries were first planted in 2006 and then 2012 saw the pioneering of a new fruit to be grown in the UK; the kiwiberry.

The farm has become one of the largest and most modern farms in the UK with a third generation of the family; George’s sons Richard and Nicholas, now a vital part of the ever-growing business.

Withers Farm grow strawberries and blueberries from June to October and kiwi berries from August to September.

Withers Farm are Global Gap, Red Tractor, Nature, Leaf and SEDEX certified, showing that berries have been grown ethically and sustainably with care for the environment. 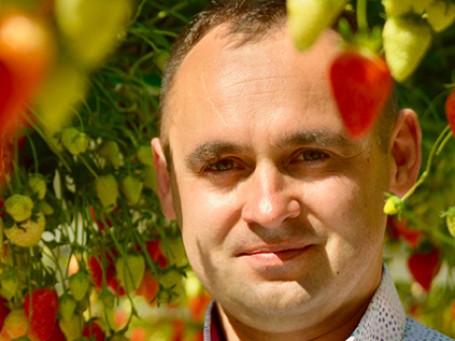 Ilja and his wife Natasha lead the strawberry dream team at Berries Direct Farming in Norfolk.  Alongside their team at Hempnall, Ilja also manages Berries Direct site at Martham near Great Yarmouth.

Ilja is passionate about developing the farming strategy to enable sister company Soloberry to supply berries to boost the nation’s health and to continue to produce berries that they know their consumers love. 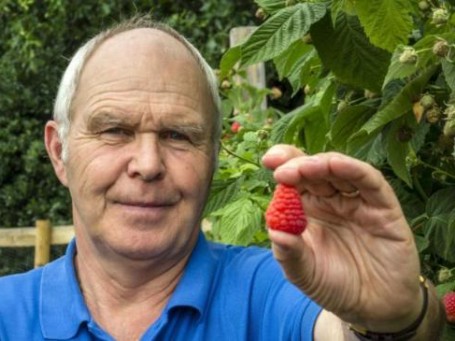 Edward Vinson have been growing berries for over 150 years in the South East of England. With such a long history in growing berries, Edward Vinson started a berry breeding programme in 1986 which has successfully discovered a range of berries that BerryWorld pack under our exclusive label. 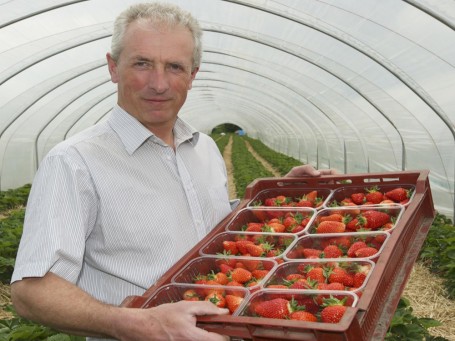 John owns and runs Decoy Farm in Rochester, Kent, which also has a converted barn that doubles as a set of charming cottages! Lucky visitors will even get a glimpse of local barn owls, buzzards, egrets and much more abundant wildlife.

John currently grows 85 acres of strawberries, blackberries and raspberries along with other fruit, and the farm is steadily growing. 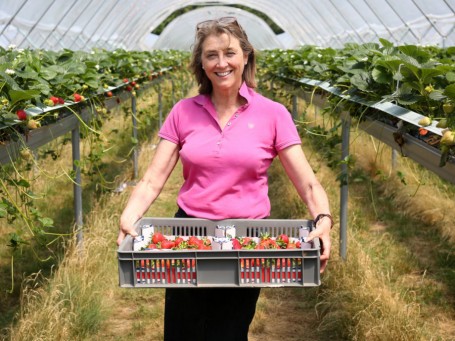 Jon and Marion Regan’s family farm, Hugh Lowe Farms is based in Kent, The Garden of England. The farm was established over 120 years ago when Marion’s great-grandfather planted his first crop of strawberries to supply the family stand at the old Covent Garden market.

Today, Hugh Lowe Farms specialise in soft fruit producing 2,500 tonnes of strawberries, 300 tonnes of raspberries and blackberries.  All crops are covered and recently the farm have invested in state of the art glasshouse production growing premium late season blackberries and raspberries. 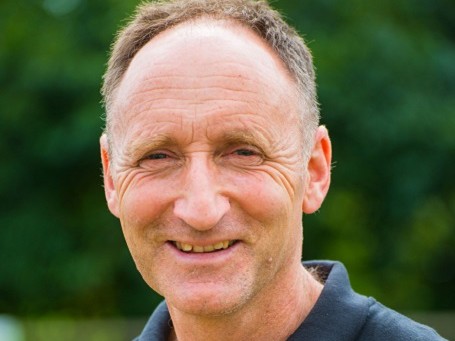 Fruit farming runs through the veins of the Chambers family, who have successfully grown fruit in Kent for a number of generations. Kent’s mixture of chalk, sand and clay soils, together with a drier climate than the rest of the UK, combine to offer the optimum horticulture conditions -hence the ‘Garden of England’ reference which Kent has enjoyed for over 400 years.

The current business was set up by WB Chambers in 1952. Third generation owner and present managing director Tim Chambers took over the reins of running the family’s farms in 1990, focusing on berry, currant and stone fruit production.

Chambers is the largest independent cane fruit grower in the UK, supplying quality fruit directly from the farm to many of the country’s major multiples.

The company grows an extensive range of berries, currants and stone fruit and is especially recognized as market leaders in the year-round supply of quality raspberries and blackberries. Chambers is also a leading player in the supply of blackcurrants, redcurrants, cherries, gooseberries, strawberries, blueberries and rhubarb. The business propagates 1.5 million plants a year on a growing area spanning 400 hectares (1,000 acres) across 14 locations in mid and north Kent as well as at overseas farms located in Spain, Poland, Peru and Bulgaria. In addition, Chambers has established a network of partner growers spanning 17 countries.

In March 2019 as part of the company’s ongoing commitment to innovation and future proofing, Chambers launched The Fruitery. The moves signals a first in the UK in terms of Chambers representing the only specialist fruit grower to have invested in its own prepared fruit facility. The Fruitery provides the opportunity for Chambers to supply a retailer own label product enabling foodservice and major multiples to compete in the growing take home and on-the-go prepared markets, meeting the growing customer demand for a berry medley product that comprises the same high-quality berries direct from the grower and supplied via a shortened supply chain. The Fruitery range comprises a four and five Berry Medley in 160g, 220g and 240g variants; an 80g Blueberry snack pot; a Strawberry, Apple and Grape Medley in 130g and 160g variants; a Strawberry & Apple Medley in 130g and 160g variants; a Strawberry and Grape Medley in 130g and 160g variants. In addition, there is the option of a Catering pack (600g, 1kg and 1.5kg) in a variety of medley choices. 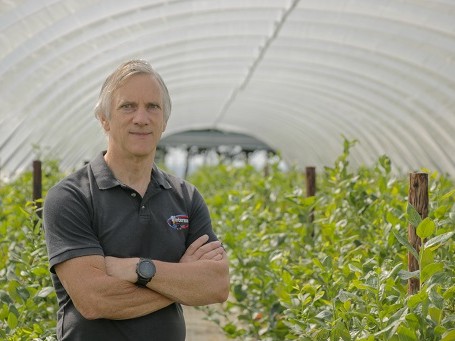 Winterwood Farms is a family business, owned and run by Stephen Taylor and his wife Jackie. Established in 1978, the Winterwood Farms was one of the first to grow raspberries and blackberries in polytunnels in the UK. From small beginnings, the company now has 12 farms in 4 countries and is a specialist blueberry producer. The company operates as a family business, run by the owners, with dedicated staff central to its continued growth.

Stephen and his team produce significant quantities of blueberries for BerryWorld consumers to enjoy. The Winterwood team want to delight each consumer when they open a punnet; they carefully grow and handpick the best varieties for every BerryWorld punnet.

Winterwood Farms are BRC, Global Gap, Red Tractor, Sedex, LEAF, and Nuture certified, showing that berries have been grown ethically and sustainably with care for the environment. 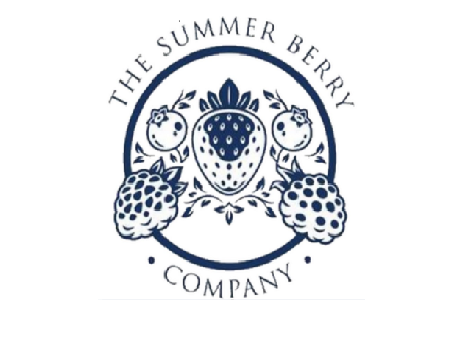 The Summer Berry Company brings the taste of the summer all year round with farms both in Sussex and in Portugal, with the initial seeds of their business starting way back in 1966.

It has industry leading glasshouse and field growing systems that allow picking between February and December in the UK and all year round in Portugal. The international nature of their farms allows The Summer Berry Company an extended period of growing to delight our BerryWorld for longer.

The Summer Berry Company are our largest grower and produce significant quantities of strawberries, raspberries, blackberries and blueberries for BerryWorld consumers to enjoy. Their highly experienced team focus on producing great tasting berries on farms that buzz with biodiversity and lead the way in sustainable farming. Their aim is to delight every customer when they open a punnet of their fruit.

The Summer Berry Company is Nurture​, Leaf​, Red Tractor​, Global Gap​, Sedex​ and BRC​ certified, showing that berries have been grown ethically and sustainably with care for the environment. 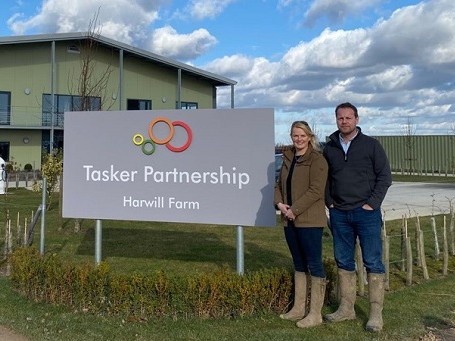 The farm is working towards being carbon neutral with an on-site wind turbine, solar power, biomass boiler and a new state of the art packhouse. Which means you can be sure BerryWorld berries from Tasker Partnership are truly sustainalicious!

Tasker Partnership is Nurture​, Global Gap​, Sedex​ and BRC​ certified, showing that berries have been grown ethically and sustainably with care for the environment. ​ 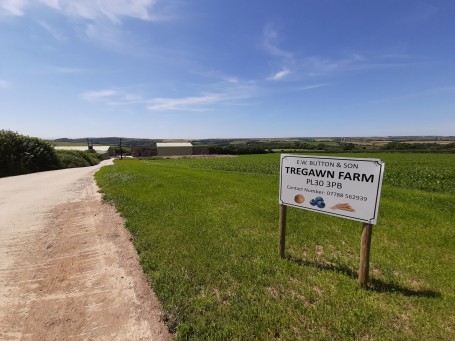 E W Button & Son are based at the Tregawn Farm in North Cornwall and grow blueberries for BerryWorld from June through to September.

Tregawn Farm is situated in the parish of Michaelstow, between the picturesque Allen Valley and Bodmin Moor, approximately four miles from the North Cornish coast.  It was purchased by E.W. Button in 1939 and is now managed by his grandson, Joe Button.

Today the family farm is managed by Joe Button with support from his parents, Andrew and Jean. The farm is a forward-looking business investing in modern technology and researching into new crops to meet the changing demands, which means you can be sure BerryWorld berries from E W Button & Son are truly sustainalicious!

E W Button & Son is Nurture​, Global Gap​ and Sedex​ ​ certified, showing that berries have been grown ethically and sustainably with care for the environment.​ 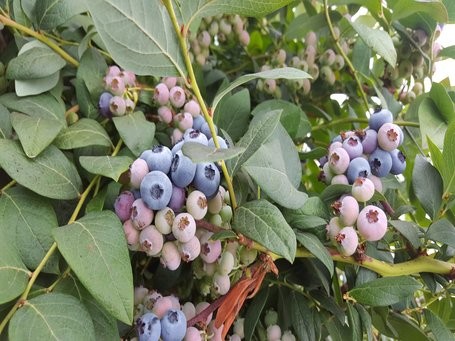 Cobrey Farms is owned and run by the Chinn family in south Herefordshire, where they grow blueberries for BerryWorld.

Chinn family farming at Cobrey Farms dates back to 1925, when Wilfred Chinn took on the tenancy of 125 acres. Wilfred’s descendants, Henry and Chris, joined the business in 2000 and 2007 respectively, and brought with them a wealth of experience in agriculture and engineering.

Cobrey Farms have been harvesting BerryWorld blueberries since 2009. High quality technology and packing techniques keep the blueberries cool and fresh to ensure the best taste and texture. Carefully managing a range of the varieties over targeted locations, which yields blueberries from June to October.

Cobrey Farms are Global Gap, Red Tractor, Nurture, Leaf and SEDEX ​certified, showing that berries have been grown ethically and sustainably with care for the environment.​

Next
All information, content, and material of this website is for informational purposes only and are not intended to serve as a substitute for the consultation, diagnosis, and/or medical treatment of a qualified physician or healthcare provider. If you or any other person has a medical concern, you should consult with your health care provider or seek other professional medical treatment.